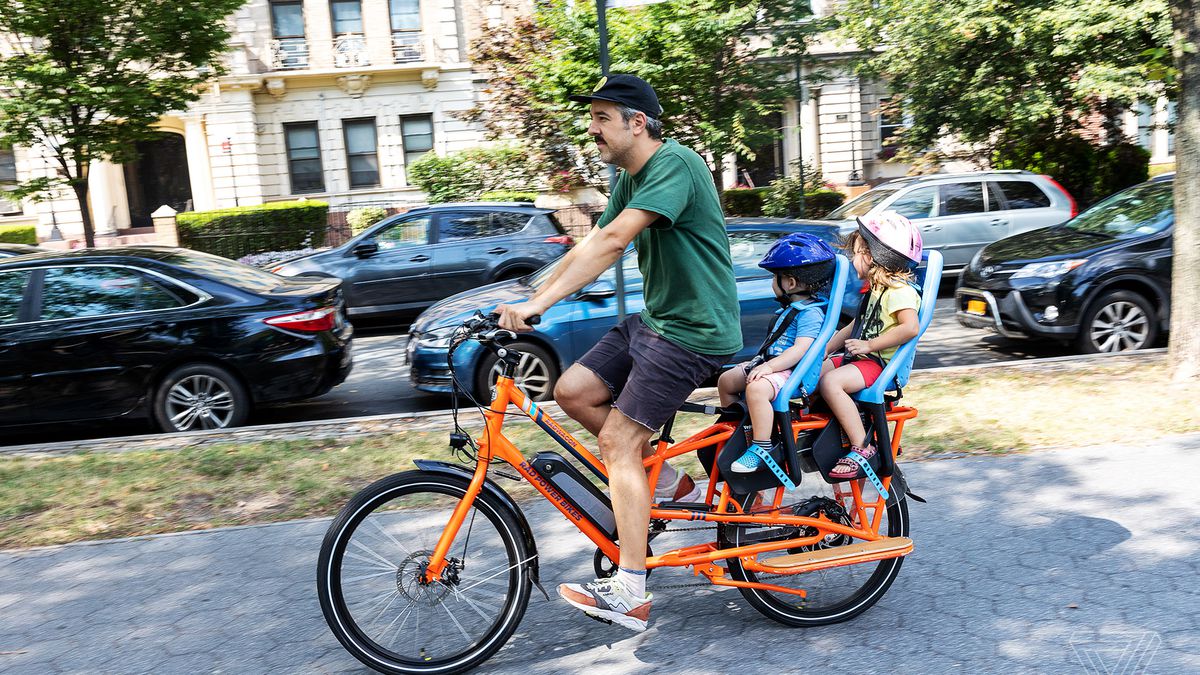 Ihate owning a car. The daily hunt for a parking spot, the inevitability of traffic, the knowledge that for every gallon of gas I pump another chunk of the polar ice cap slides into the ocean. My dream is to completely replace my car with a bike, preferably an electric one, but it’s a tough sell. My wife and I have two little kids, and we like having the freedom to take weekend trips outside the city. A car accommodates our lifestyle. I’m desperate for an e-bike that will, too.

The RadWagon from Seattle-based Rad Power Bikes gets me most of the way there. This electric cargo bike is the first legitimate car replacement that I’ve encountered in my (admittedly) short time testing and reviewing e-bikes. The RadWagon mostly replaced my own need for a car for over a month of testing. I used it to take my kids to school, commute to work, and go grocery shopping. Meanwhile, my car sat gathering dust (and bird droppings).

Cargo bikes are not for everyone — they’re longer, heftier, and they have a larger turning radius that can be unwieldy for some riders. But the RadWagon’s powerful battery and motor helped neutralize most of the downsides of riding a cargo bike. I never felt sluggish while blazing past other bikers on my six-mile commute to work or flying down the bike path with two kids and a pannier full of groceries on the back deck. 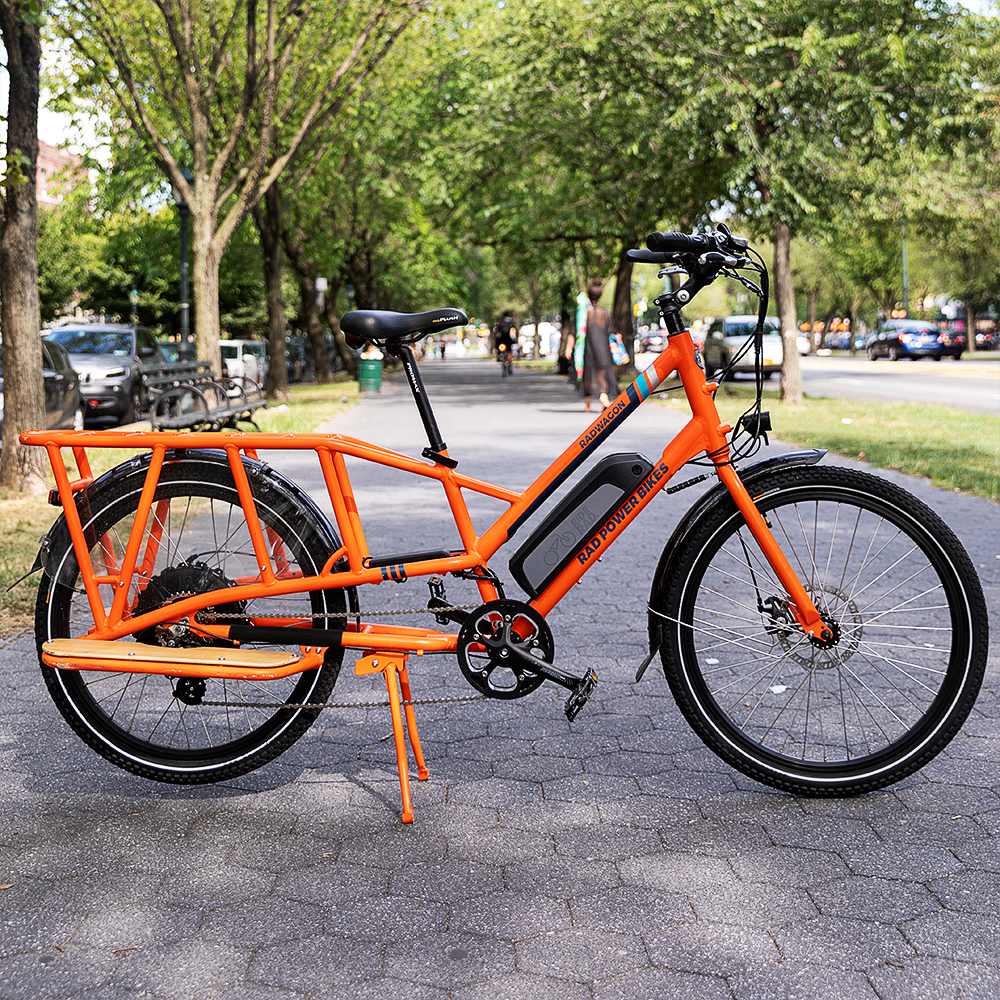 If anything, the bike’s sturdiness gave me the added confidence to truly own the road, as I often found myself riding down the middle of the lane rather than shirking the line of parked cars on the right-hand side of the street. The RadWagon is the SUV of e-bikes.

That said, the RadWagon won’t fit seamlessly into everyone’s lives. One drawback was its extreme weight, but we’ll get to that later. Thankfully, it comes at a price point that’s really kind of astonishing in its affordability. Seriously, Rad Power Bikes, $1,499 for a cargo bike? How are you making money?

Rad Power Bikes CEO Mike Radenbaugh told me he built his first electric bike at age 17, after getting tired of riding the school bus. He used a high-powered brushless motor and Tupperware containers to hold the wires together. He founded the company in 2007, later bringing on two college friends to help him sell bikes online.

The company has since grown to over 100 employees with offices in Seattle, Washington, Vancouver, BC, and Utrecht in the Netherlands. Rad Power Bikes, which is profitable, brought in $45 million in revenue in 2018, a 125 percent year-over-year increase, and it expects to rake in $100 million by the end of 2019.

The RadWagon won’t win any beauty contests, with its garish orange aluminum frame and tubby 672Wh removable battery perched obscenely on the down tube. But it can still turn heads out on the street. I was stopped a number of times while out riding with questions about the bike’s specs and price — usually by parents pushing strollers.

It’s no question why this thing is so appealing to parents: the RadWagon can fit two Yepp child seats on the back. Maybe your kids are too old for their own seats? Rad Power Bikes sells accessories, like seat pads ($25) and fixed rails ($199) that keep the kids centered on the rear deck. Remove the rails, and give an adult friend a ride. The entire bike’s maximum carrying capacity is 350 pounds (159 kg), with the rear deck alone rated for 120 pounds (55 kg).

There are wooden running boards on either side, which were useful when my daughter wanted to climb up into her seat. And the center kickstand was sturdy enough that I never worried that she was going to bring the whole bike down on top of her.

When weighed down by children or packages, the bike can get a little pokey, especially when climbing uphill. But that’s to be expected. I’ve never known any bike, electric or otherwise, that doesn’t struggle with over 250 pounds of weight. For those heavier trips, the seven-speed gear shifter really helped out. I enjoyed the interface of RadWagon’s gear shifter: a thumb-sized paddle to shift up and a separate button for down.

The RadWagon isn’t the most powerful e-bike on the market, but the 750W direct drive hub motor isn’t anything to sniff at. The motor kicks in after about a half-turn of the pedals, but I’ll readily admit to using the twist-throttle to kick-start the bike from a dead stop more than once. (Most of the time, if I’m being totally honest.) The top speed is 20 mph (32 km/h), though I was able to squeeze an extra mph or two with some fast pedaling.

There are five power settings that you can toggle through on the LCD screen: the first two were mostly useless, the third and fourth settings were more than adequate. I didn’t notice a huge difference between four and five, so I found myself sticking with four to save on battery.

Rad Power Bikes says the RadWagon’s range is between 25-45 miles, but I found that with kids in tow and the power setting on four, I was depleting the battery after only 26 miles or so. Riding the RadWagon without battery or motor is extremely difficult given the overall weight, so I would recommend being very mindful of your battery level. Regenerative braking helps, but regular overnight charging with the 48V 2 amp charger (which operates on both 110V and 230V AC power outlets) is the safest bet.

The RadWagon is affordable because it eschews a lot of the bells and whistles you tend to associate with e-bikes: no app, no GPS tracking, no Bluetooth, no anti-theft. There are integrated front and rear lights that run off the motor. The rear one lights up every time you squeeze the brakes, which is a nice touch. But a VanMoof this ain’t. Depending on your e-bike expectations, this is either a relief or a drag.

The ride experience was mostly enjoyable, though I would have loved to have a suspension fork up front to absorb some of the bumps in the road. There were a few times, after hitting a pothole or speed bump a little faster than I intended, when I could feel all the gears and components underneath physically shift, which was nerve-wracking. Front and rear 180mm Tektro Aries mechanical disc brakes provided plenty of stopping power, even in loose terrain. I did detect a persistent squeak when reversing the bike that, while annoying, I’m sure could be fixed by tightening the spokes.

Speaking of noise, the Shengyi motor definitely gives off a noticeable hum during riding, which I found a little rankling at times, but easy to ignore at others. To be sure, a tolerance for some motor noise is required with most e-bikes.

The inclusion of the throttle is sure to rankle some purists who think this makes bikes like the RadWagon more of a moped than a bicycle. It certainly places them adjacent to the throttle-powered e-bikes used by New York City’s legions of food delivery workers, which are technically illegal in New York State. Is a throttle-powered bike a bike or moped? That’s a debate for a different day.

Let’s talk about the weight very quickly, because holy crap was this thing heavy. I probably wouldn’t be commenting on this if I had a garage where I could just park the RadWagon, no fuss. But alas, I live in an apartment building with bike storage in the basement, so that meant wrangling the RadWagon up and down a flight of stairs every time I wanted to ride it. And folks, I’m not exaggerating when I say it nearly killed me.

“Our bikes are usually five to 10 pounds heavier,” Radenbaugh tells me. “That’s because our battery packs are higher capacity, we use bigger hub motors, we use thicker spokes and downhill rims and tires with liners built into them, and big comfy seats. Everything’s just kind of built to be more robust and more approachable by people that are transitioning from car lifestyle to bike lifestyle.”

Lugging the RadWagon up and down a set of stairs didn’t make me more inclined to transition to a car-free lifestyle. And while there’s plenty of free storage for my 3,600 lb Subaru Outback on the street in front of my building, there is not a safe, accessible public place for me to keep an electric cargo bike. That’s not RadWagon’s fault; it’s a failure of city planning.

One thing about the RadWagon that isn’t heavy is the price. The cargo bike sells for $1,499, down $100 since June, which is the same as each of Rad Power Bikes’ other seven models. That’s cheaper than practically every electric cargo bike on the market. If you’re looking to replace a car with an e-bike, a price like that is sure to soften the blow.