Thousands of residents in and around the Australian city of Townsville have been warned of “unprecedented flooding” after dam gates were fully opened on Sunday as monsoon rains continued.

Rain in the state of Queensland, where Townsville is located, has swollen the Ross River dam beyond its capacity.

Officials earlier warned that up to 20,000 homes could be flooded.

Cars and livestock have already been swept away around the coastal city in the north-eastern state.

On Sunday, the Australian Bureau of Meteorology warned of “risk to life and property” as the dam gates serving the Ross River were “opened to their full setting”.

“Conditions will change rapidly and continuously. Stay informed, look for updates and follow advice of emergency services,” the bureau said.

It added that the dam would release up to 1,900 cubic metres of water a second, a “dangerously high” amount.

Townsville has received more than a metre of rain in just a week, which is more than 20 times the average for the time of year – beating the previous record set in 1998, in what became known as the Night of Noah.

Thousands of residents in the area have already been affected, some left without power and others cut off by flooded roads.

Images and footage shared on social media show people wading through waist-high water in the streets. 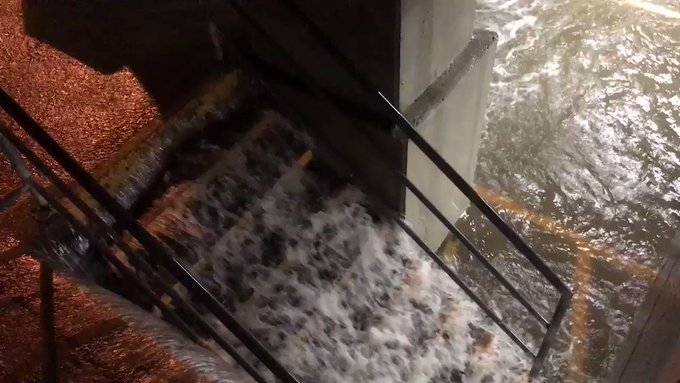 The car park at CastleTown shopping Centre is flooding in Townsville as water levels rise. @abcnews

The army has been helping to protect homes with sandbags, while rescue teams have been evacuating people using rafts.

Northern Queensland has a tropical climate and experiences monsoon rain from December to April. But the current conditions in the Townsville area are rare.

Meanwhile, parts of southern Australia are in the grip of a severe drought.

January was the hottest month on record for Australia as a whole, with the southern city of Adelaide breaking its own records twice in the month, first reaching 47.7C and then 49.5C.

The heat has caused bushfires and a rise in hospital admissions.